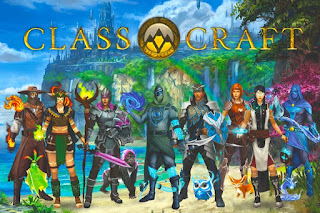 We’re back for Week 2 of Gamifying the Classroom with Classcraft!! I know you’re super pumped. This week, we’re going to get a little more into the nuts and bolts of how you can use Classcraft with your students to encourage discipline by looking at HP and XP.

First, though, I want to show you what Classcraft looks like to you when you’ve got it open.

This is what the profile of a student looks like. Obviously, I’ve removed the students’ name from the picture. Here is where you can quickly click on the +XP button or the -HP button and hand out rewards and consequences. As you can see, the students are able to customize their player – this student has a pretty nifty shield and a reindeer pet. He also has 3 powers that he’s gained through leveling up. We can see that he doesn’t always do what he’s supposed to do as he’s lost some HP but he has a lot of XP so clearly he can function. The little characters on the right side of the screen are his teammates. Classcraft allows you to put students into teams (something we’ll talk about more throughout the series) so that students work together to win Boss Battles and help each other out when HP is lost.

Okay. First, let’s talk about HP. HP, or Health Points, cannot be given by the teacher. HP is what the teacher takes away as a consequence for a bad behavior. Let’s say that John Smith has received a warning in class. I would navigate to the Classcraft screen (or use the app on my phone) and click the red circle with the minus sign. Up pops the following screen.

As you can see, I have a lot of ways students can lose HP. These are all able to be customized by the teacher (I’ll show you that later). The game gives you some prearranged items but you can change them, delete them, and add more. You can even do a “Custom Value” and give a 1-time loss. I generally only take HP for warnings and pencils. But the rest are there if I need them. You can set these up by class so if you have a student in one class who asks inane, off-topic questions all the time, you can have an HP preset for that. And if you turn the volume in the game on, there are sad sound effects for when students lose HP.

After you apply the damage, if the student has a Healer teammate with the Healing power, the game will give the option for that student to heal the offender. Some students choose to help their teammate and some don’t. I have a student in my 1st period who flat refuses to help her teammates. I’m not sure why but we’re working on it.

If a student loses all of their HP, they will fall in battle and be given a consequence. The teacher can set those consequences too. Since this is a system in addition to my regular discipline system and my school’s discipline system, I don’t give consequences that are the same as our regular consequences (teacher detention, referral, etc.) Instead, I have consequences like “silent lunch,” “perform a rap about the lesson,” and “assigned seat for a week.” Again – you can totally choose your own consequences!! Teammates of fallen students also lose HP which can be a good incentive for students to help each other out. The game also allows students to regenerate a set amount of HP every night (again, set by the teacher) so that they can earn back what they’ve lost. I have mine set at 5 HP every night.

Don’t forget – you can totally set all the presets for loss of Health Points on the settings screen. Ever since I started taking HP for not having a pencil, I rarely hand out pencils – especially because students can earn XP for loaning a pencil to a friend!

Speaking of XP – that’s the other topic for today. XP is the reward. When students accumulate enough XP to level up, not only can they learn new powers but they can equip new equipment, train new pets, and do other cool things. So let’s say that John Smith does something good and I need to give him XP. On the main Classcraft screen, I would click the yellow circle with the +. Up pops this screen:

Again – customize the presets as you want. The one I use the most is the “loaning a pencil to a friend” one. I don’t really use the “all week without a warning” one because that would be most of my students. You can set the amount of points given too. I always have students telling me they loaned so-and-so a pencil so that they can get the XP points. I was hoping that by giving XP for good grades, I would see an uptick in grades but that hasn’t happened so far.

For those students who are motivated extrinsically and enjoy video games, earning XP is definitely a priority for them. Earning XP can be a great incentive and can get students to really help with things. If you have things you need students to do and have a hard time getting volunteers, consider offering XP. Pair the XP with really cool powers for the students to learn and you may have a winner on your hands!

That’s about it for HP and XP. I realize this was kind of an information dump but I hope you’ll forgive me. I’ll try to make things a little more interesting next time. 🙂 I’m thinking I might add another week to the series and focus on the student-side of the screen – do you think that would be beneficial? Did you enjoy this post? Have any of you started to use Classcraft? Let me know! I’d love some feedback. Sound off in the comments!!

For now…that’s a wrap!