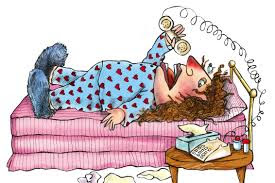 There are very few times when I’m envious of a cubicle, 9-to-5 job. One of those times is the ability to use the bathroom whenever you want. There’s nothing like being halfway through a class period, facing a bunch of sixth graders, and having to go to the bathroom like nobody’s business. No amount of thinking “you don’t really have to go, it’s just 30 more minutes, you can do it” can stem that tide. Wouldn’t it be nice to just be able to pop up from your desk when Nature calls and go to the bathroom? Ah…office job perks.

The one other major time that I wish for that office job is when I’m sick. Being sick as a teacher is not easy. Let me give you an example.

Monday, I woke up sick as a dog. I’ll spare you the details but suffice it to say that I wouldn’t be dragging myself into work. So I put in for a sub job. Then I worried that no one would pick up my job and what would the kids do and what if we had to split them up and maybe I should just suck it up and go to school.

But I really was sick so I stayed home and luckily a sub picked up the job and we were golden. I slept, caught up on some New Amsterdam, and hoped to feel better by Tuesday.

No such luck. Tuesday, I spiked a fever and had to call in again. This time, no sub picked up my job and so my classes had to be split. Not to mention that we were benchmark testing today so someone would have to test my classes and on top of all that, I was supposed to cover Mrs. Taylor’s duty so now someone had to cover me covering her duty.

You got tired just reading all that, didn’t you?

And, even though I really didn’t feel like going back to work on Wednesday I pulled myself together and went. Luckily, I made it through but it’s going to be a long two weeks until Spring Break.

Don’t you just wish sometimes that if you are sick and have the sick days, you can just put in to be out without having to worry about anything?